Creamil (クリーミル) is a humanoid yeti crab and a supporting character in Wadanohara and the Great Blue Sea. She is part of Minero's friend group.

Creamil has long white hair pulled into high twin tails secured with hair ornaments. The front sections are rather messy, with sections of hair flicking out from the sides of her face. Her eyes are gray with white pupils and she has a visible yellow blush on her face.

She wears a beige and white dress. The neck, lower sleeves and underskirt are white and appear to be made of a soft, fluffy material. The torso area is light beige, with four dark gray buttons on the front. Two triangular sections overlap the white area and are accented with visible stitching along the edge.

The upper section of the sleeves is made of a darker beige, pinstriped fabric. Creamil also wears stockings made of the same material. Her boots are white and fluffy, with two dark gray buttons on the side of each. She also wears black gloves.

Creamil is often showing off to Minero, but they aren't on bad terms at all.

Minero is Creamil's friend and the leader of her friend group. They often argue with each other throughout the game.

Creamil's dialogue portrait in Wadanohara and the Great Blue Sea. 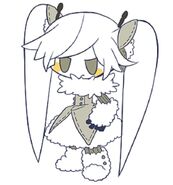 Retrieved from "https://okegom.fandom.com/wiki/Creamil?oldid=53664"
Community content is available under CC-BY-SA unless otherwise noted.