Crea Flankenstein (クレア・フランケンシュタイン) is one of the characters that is part of the Obsolete Dream world. She made her first official appearance in Seaside Dispatches 2.

Crea has white, pale skin, black and pink hair, and black and green eyes. The black half of her hair is curly, while the pink half is straight. She has a screw stuck in her head, the head of said screw sticking out the right side of her head, and the tip sticking out the left side of her head. Red ribbons are tied to both sides of the screw. She's also covered in stitches, being apparent on her face and fingers.

She wears a black hoodie with white cuffs, a red striped shirt with a white collar, and a stitched-up black tie; she also wears a black skirt with a white petticoat. She wears red socks that match her shirt and black and white sneakers with green soles and laces. Her sneakers are decorated by red dots and green symbols that resemble the ones in her eyes.

Crea has a soft and sweet personality. She is often seen comforting her adoptive father Satanick when he is feeling depressed about the passing of Victor Flankenstein, her original father.

Victor Flankenstein used to have two daughters, but both tragically died in an accident. As such, Victor used their bodies to create a new girl, who came to be known as Crea Flankenstein. Crea was quite awkward and clumsy at first, and she was incapable of talking. With time, she grew into a thoughtful and sincere girl; yet, still, her range of emotions were limited. She never laughed; she never cried. Victor blamed himself for this. When Victor passed away, however, Crea cried for the first time.

Victor had made Satanick promise to take Crea to his world after he passed away. As such, Crea now lives in the Pitch Black World together with her adoptive father.

Victor is Crea's father and creator. He created her out of his two daughters who passed away and blamed himself for Crea's limited range of emotion. When Victor passed away, Crea cried for the first time in her life.

Satanick is Crea's adoptive father. Before Victor Flankenstein passed away, he made Satanick promise to take care of her. The two are on good terms. When Satanick is feeling depressed about the passing of Victor, Crea is usually there to comfort him. For example, in one drawing she offered him candy in an attempt to cheer him up.

They seem to be close with each other as shown in a now-deleted mini comic. 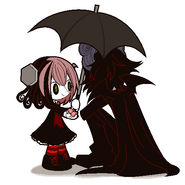 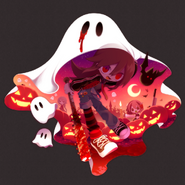 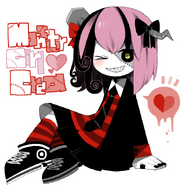 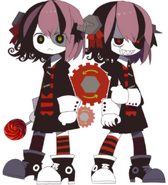 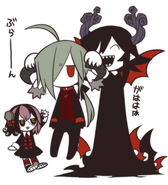 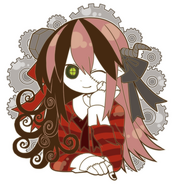 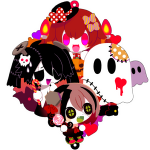 Retrieved from "https://okegom.fandom.com/wiki/Crea_Flankenstein?oldid=68899"
Community content is available under CC-BY-SA unless otherwise noted.