Chishibuki has long, white hair with a bang covering her left eye. She has small, black, slightly curled horns. She wears a gray business suit with black furry cuffs over a white shirt. She also has gray tights, black shoes, dark gray gloves, earrings, and a heart-shaped demon tail, as well as a necklace. Her eyes are closed.

In her younger years, she had shorter hair which was styled into two braids.

In her Obsolete Dream appearance, she wears a turtleneck sweater, black pants, and a necklace.

In chapter 7 of Obsolete Dream, she initially behaves in a kind and caring manner, but it seems that she has the same hobby of torturing Sullivan with her husband and is violent like him.

Gyakuten is Chishibuki's husband. They both torture Sullivan together. They appear to have a good relationship and refer to each other with pet names.

Sullivan is a torturing target for her and for her husband as well. 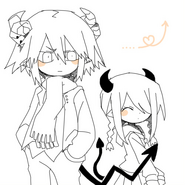 Retrieved from "https://okegom.fandom.com/wiki/Chishibuki?oldid=53653"
Community content is available under CC-BY-SA unless otherwise noted.