Cherryblod has raceless white skin, like most other characters, and red eyes. He has short light pink hair, where the bangs part at the left, with long pink antennae with short antennae in front, and a pink shrimp tail. He wears a suit consisting of a white dress shirt, black dress pants, a red bowtie, and a black tuxedo. He wears black dress shoes. In his in-game appearance, the pockets and the collar of the tuxedo were gray.

He is paternal and caring, devoted to his wife, and affectionate to his daughter.

He used to be a gangster; his former name was Cherryblood. Chlomaki is, by all accounts, the one in particular that has knowledge about his past; even his daughter was ignorant of his previous name and probably his past.

In a bonus video, he states to Chlomaki that his previous life is "all in the past, and I have family that’s more important”.

Doloz is Cherryblod's wife. They both share great love for each other.

Chlomaki seems to know about Cherryblod and his past as a gangster.

Cherryblod's dialogue portrait in Wadanohara and the Great Blue Sea. 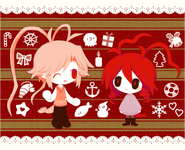 Retrieved from "https://okegom.fandom.com/wiki/Cherryblod?oldid=56813"
Community content is available under CC-BY-SA unless otherwise noted.