Charlotte (シャルロッテ) is one of the characters that has been said to be part of the Obsolete Dream world. She is one of Fumus' angels.

Charlotte has blue eyes and white hair with blue streaks in two braids that are tied in blue ribbons. She wears a gray sweater over a white dress shirt with a blue bow, a big blue bow behind her, a dark gray pleated skirt, and dark gray socks with black loafers.

She has white feathered angel wings and a soft yellow halo above her head.

Before her redesign, she wore a gray military outfit, which somewhat matched with Elwine's. Her bangs were slightly more curly. She also held a wand that had a yellow star on the tip and a blue bow below the star. Her wings used to be much more detailed and structured.

Up to this day, Charlotte has only appeared in some of Deep-Sea Prisoner's illustrations.

Fumus is Charlotte's God. She inhabits his world as one of his creations.

Charlotte is a student of Taffy. [1]

They attend the same school as Charlotte.

Nadine used to attend the same school as Charlotte. 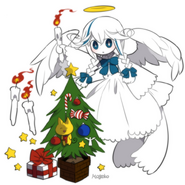 There are currently no known quotes by Charlotte.

Retrieved from "https://okegom.fandom.com/wiki/Charlotte?oldid=68655"
Community content is available under CC-BY-SA unless otherwise noted.