Chantrieri (シャントリエリ) is a character that has yet to officially appear in any series.

Chantrieri has white skin, gray eyes, and short, dark gray hair in a bob cut with blunt bangs, as well as a black demon tail. They wear a jester-like hat with two long points, which is checkered and striped on one side and pitch black on the other. The hat also a pair of eyes on it that match their eye color, and is decorated with a crescent, an 8-pointed star, and an hourglass-like shape on the checkered side; and a die, pocketwatch, and horned skull on the black side. They wear a white dress with a black bow tied at the collar, black shorts with suspends, white socks, and black mary-janes. They also wear a single black glove on their left hand, and are shown holding a cane with black and white vertical stripes.

Up to this day, Chantrieri has only appeared in some of Deep-Sea Prisoner's Illustrations.

It's unknown what characters are they related with. 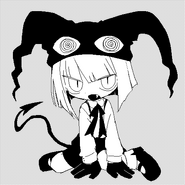 Retrieved from "https://okegom.fandom.com/wiki/Chantrieri?oldid=50555"
Community content is available under CC-BY-SA unless otherwise noted.