Calendula (カレンデュラ) is a character that has yet to officially appear in any series.

Calendula has horns similar to Ivlis, orange hair tied into low pigtails, and multi-colored eyes with a gradiant. Their outfit appears to be all one piece, being mostly red with white polka dots; the collar of their outfit is frilly, and has a bow tied to it that matches the bulk of their clothing. They also wear asymmetrical stockings that have horizontal orange and pink stripes on one side, and vertical yellow and mint green stripes on the other; they also wear red, high-heeled ankle boots with blue bows. They're also covered in various little decorations, such as a moon pinned to their hip, a star and a sad face pinned to their right shoe, and a small bow with a skull in the center in their hair.

Up to this day, Calelndula has only appeared in some of Deep-Sea Prisoner's illustrations.

Calendula currently has no known relationships. 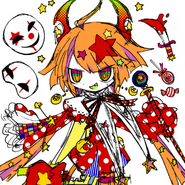 Retrieved from "https://okegom.fandom.com/wiki/Calendula?oldid=51824"
Community content is available under CC-BY-SA unless otherwise noted.