Brown (ブラウン) is a character that has yet to appear in anything. She seems to know Sugary, Decay, and Mint.

Brown has dark, unsaturated brown skin with short white hair, very light brown horns with the tips dark brown, and soft gray eyes. She has a cream turtleneck with a light brown jacket that has a darker brown hood and symbol on the left side over it. She has a yellow bell tied around her neck. Her shorts are dark brown and puff out at the bottom; a darker brown belt with a silver buckle is around the waist. She wears knee-high cream socks and dark brown boots with white symbols on the side. She has a cow tail with a white fluff on the end.

Not much is known about her background.

Up to this day, Brown has only appeared in some of Deep-Sea Prisoner's Ilustrations.

Sugary seems to be one of Brown's possible friends.

Mint seems to be one of Brown's possible friends.

Decay seems to be one of Brown's possible friends. 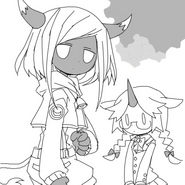 There are currently no known quotes by Brown.

Retrieved from "https://okegom.fandom.com/wiki/Brown?oldid=65905"
Community content is available under CC-BY-SA unless otherwise noted.