Bloody Mary (ブラッディ·マリー) is a character that has yet to formally appear in any series. She is the gore witch and tends to go too far with things the majority of the time.

Bloody Mary wears a red, blood-dripping witch hat with a large dark crimson ribbon as well as a frilled dress composed of the same colours. Most of her clothing has lace edging and is white, red, and black. She also wears boots in a similar fashion and a short red cape held together by a small white skull. Her hair is a desaturated blond, her skin is raceless white, and her eyes are orange with subcircular narrow black pupils. Her nails are red and pointy. Gore drips from her clothing.

Bloody Mary is referred to as the Witch of Gore. Not much is known, but she has a tendency to overdo things. She's also said to be selfish.

Bloody Mary's silhouette in Wadanohara and the Great Blue Sea.

Bloody Mary's cameo in Wadanohara and the Great Blue Sea.
Add a photo to this gallery 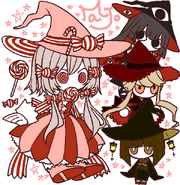 There are no known quotes from Bloody Mary.

Retrieved from "https://okegom.fandom.com/wiki/Bloody_Mary?oldid=53578"
Community content is available under CC-BY-SA unless otherwise noted.