Benihotaru (紅螢) is a character that has yet to appear in any series. He is Satanick's 5th subordinate.

Benihotaru has short red hair with flat bangs, black horns, and red eyes with slit pupils. He wears a black cape with a red undertone and a dark red long sleeved shirt with a high collar with three gold buttons that cuts off after the third button with another shirt of the same color beneath it.

Benihotaru has a tendency to dress in feminine clothing. He is a bit of a hysterical clean-freak.

In the original character sheet, Benihotaru had the character code 0302.[1] However as of now, it is currently unassigned.

Benihotaru's cameo in a bonus video.
Add a photo to this gallery 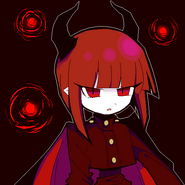 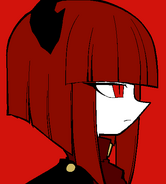 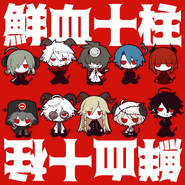 There are no known quotes from Benihotaru.

Retrieved from "https://okegom.fandom.com/wiki/Benihotaru?oldid=57237"
Community content is available under CC-BY-SA unless otherwise noted.