Beniduru/Akeduru (紅鶴 / 朱鶴) is one of the characters that has yet to appear in any series. They are a bird that can change their gender, and with it, their personality.

Beniduru has yellow eyes with red lining below her eyes. She has white hair with long bangs that covers her left eye and has red layering behind her white hair. Her bangs and hair also has purple spots and red spots, where her feathers appears above the red spots. She wears a red yukata with crane patterns on it. However, her yukata sleeves turn into white feathers. She also wears brown geta with the thong being red.

While as Akeduru, his eyes and hair remains the same as his female form, but his hair is shorter and has more feathers above. He wears traditional Japanese clothing, which consists of a black kimono with a red juban underneath, a gray hakama, a black haori (jacket) which the sleeves turn into white feathers, white haori himo, and a pair of brown geta accompanied with a pair of white tabi (socks). He has long and sharp red nails and holds a kiseru.

Not much is known about them, but Akeduru seems to have a negative personality.

Up to this day, Beniduru/Akeduru has only appeared in some of Deep-Sea Prisoner's Illustrations. 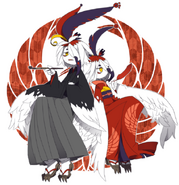 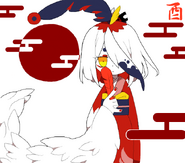 Retrieved from "https://okegom.fandom.com/wiki/Beniduru/Akeduru?oldid=51419"
Community content is available under CC-BY-SA unless otherwise noted.