Ater (アーテル) is one of the supporting characters from The Gray Garden. She is one of Kcalb's two cat underlings.

Ater has long white hair cut into a Hime cut with red eyes with white pupils, black cat ears, a black pointed tail, and two pair of small bat wings. She wears something of a school uniform, consisting of a white dress shirt with a red tie, a light gray blazer, dark gray pleated skirt, red checkered leggings/tights, boots with the top folded over and having small four black buttons, and a little bat wing sticking out on both boots. Although her sprite had shown her to have two tails, in her official art, she is seen with only one. Like Arbus, she is also shown holding a black trident with diamond shapes and a bat wing shape on it.

Ater seems to be rather naughty, but she knows when to be serious. She doesn't listen to her lord Kcalb's orders, as she does what ever makes her happy. She apparently likes sightseeing as shown when her and Arbus strolled in the flame underworld, and they use loopholes so they don't get blamed. Ater appears to be the more cautious, anxious of the two, as she worries more about their right doings and their safety. Her and Arbus have a habit of either finishing each other sentences or repeating the other's sentence with slightly different wording.

Not much is known about her past other than she was one of the surviving members who fought in the Great War.

Arbus is Ater's twin sister. The two are rarely apart when in their humanoid forms. They have a tendency to finish each other's sentences or repeat the other's sentence with slightly different wording. They are very close and reliant on each other.

Kcalb is Ater's master. Despite this, Ater barely listens to him, but still treats him with great respect. Kcalb, on the other hand, believes she and Arbus are hopeless and are idiots.

Ater was the one who took Grora's eye so she holds a grudge against her for it.

Ater as one of the survivors of the war.

A photo during the credits with Ater in it. 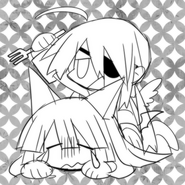 Blessing/luck
Add a photo to this gallery

Retrieved from "https://okegom.fandom.com/wiki/Ater?oldid=51150"
Community content is available under CC-BY-SA unless otherwise noted.