Apricot (アプリコット) is a character from Satanick's world. She is a vampire, Sirius' sister and Isara's half-sister.

Apricot has straight short light blonde hair styled into a bob with two long ahoge (cowlicks) adorned with four apricots, with two on each side of her head. She has raceless white skin and red eyes with vertical pupils. She wears a red cheongsam-like dress, with two rows of 6 buttons and a large jewel at the ends of her sleeves. She wears black slippers.

Up to this day, Apricot has only appeared in some of Deep-Sea Prisoner's illustrations.

Isara is Apricot's half-sister. It's been said the two are close. [1] 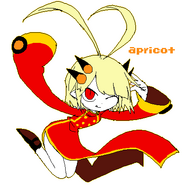 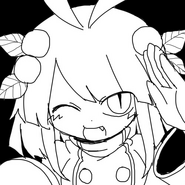 There are no known quotes by Apricot.

Retrieved from "https://okegom.fandom.com/wiki/Apricot?oldid=60075"
Community content is available under CC-BY-SA unless otherwise noted.