Alice has fair skin, dark blue eyes and long light blonde hair with straight cut bangs with a big blue bow on her hairband. She wears a white sailor fuku top, with the collar and the cuffs being brown together with a dark brown ribbon at her chest. She also wears a short brown pleated skirt, white stockings and orange tipped uwabaki. She has two small angel wings that appear beside her.

Whereas for Alicia, she has red eyes with slit pupils and a similar hairstyle to Alice, but with longer sidebangs with more noticeable curls at the bottom. A red hairband with red demon horns replaces Alice's bow headband. Her wardrobe is somewhat similar to Alice, with the exceptions that Alicia wears a long skirt that goes pass her knees and rolled down white socks. Alicia has two red demon wings replace Alice's angel wings.

She may appear cute and act innocent when Alice, but when she is Alicia, she is truly evil.

Alicia is seen smoking in one of Deep Sea Prisoner's Artworks.

She has made one appearance in the "Dying Tomorrow" mini comics by Deep Sea Prisoner.

Tsubaki is one of Alice's friends; Alice probably beats Tsubaki up with Toru.

Toru is one of Alice's friends. 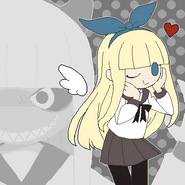 Retrieved from "https://okegom.fandom.com/wiki/Alice_Kisaragi?oldid=52365"
Community content is available under CC-BY-SA unless otherwise noted.