Alibe (在辺) is one of the characters that has yet to appear in anything. He is a demon doctor from Reficul's world with a terrible personality.

Alibe has blonde hair with two pairs of black wings on each side of his head, red eyes, raceless white skin and two more pairs of black wings in his body. He wears a white lab coat which is red on inside, over a gray shirt and black tie. Also, he wears black pants and shoes. A pointy tail can also be seen. He also wears a pair of white gloves.

Alibe has a terrible personality, as he tends to say outrageous lies. Despite this, he seems to care about his pet, Chocolaty.

Up to this day, Alibe has only appeared in some of Deep-Sea Prisoner's Illustrations. 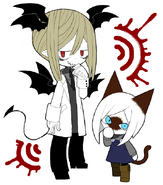 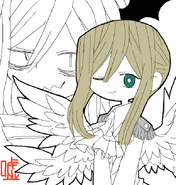 There are no known quotes from Alibe.

Retrieved from "https://okegom.fandom.com/wiki/Alibe?oldid=53607"
Community content is available under CC-BY-SA unless otherwise noted.