Albino (アルビーノ) is a character that has yet to officially appear in any series. She is a demon girl who attends school.

Albino has medium-length white hair, horns, wings and a pointed tail. Her eyes are bright red with black pupils. She wears a white, high collared shirt with a red ribbon and a black blazer over it. Albino also wears a red pleated skirt, red leggings, white gloves, and black high heeled boots. She sports a pair of tinted red glasses on her head.

She appears to be empathetic, bold and cheerful.

Not much is know about her other that she is an inhabitant of the Pitch Black World and a student.

Up to this day, Albino has only appeared in some of Deep-Sea Prisoner's Illustrations.

Giltz is Albino's stalker. She is reasonably disturbed by him. As of the 2017 10 21 update, Albino is shown to have faint feelings towards Giltz. 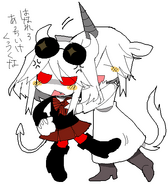 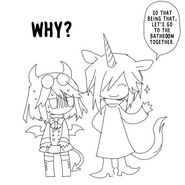 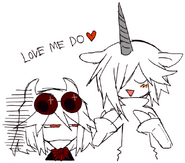 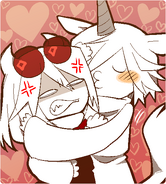 Retrieved from "https://okegom.fandom.com/wiki/Albino?oldid=51333"
Community content is available under CC-BY-SA unless otherwise noted.