Aconita (アコニタ) is a character that has yet to make a formal appearance in Deep-Sea Prisoner's creations. She appears to be a cherub.

She wears a black dress decorated with two blue ribbons on the lapel. Her black dress parts at the right side at the hips, revealing a white petticoat underneath. She wears white stockings that have buttons on them with black flats. Her halo is melting and has gradients from black to turquoise.

She is usually seen smiling, though not much is really known about her personality.

Judging from her black wings, dripping halo, and her living in the Pitch Black World, it seems she's a fallen angel. How this happened has yet to be revealed.

Up to this day, Aconita has only appeared in some of Deep-Sea Prisoner's illustrations.

Kyou and Aconita are a married couple. It is heavily implied that Kyou also has a romantic infatuation with Aconita. It has been said that he is a devoted husband to her, as well as deliberately finding enjoyment in listening to her heartbeat, which she tends to find a bit annoying. 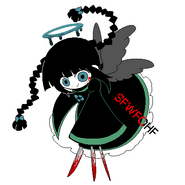 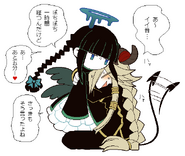 "You've been at this for almost an hour, you know." 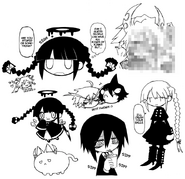 (Ehh, I guess people can have all kinds of kinks, but) "Are you stupid or something?"

Retrieved from "https://okegom.fandom.com/wiki/Aconita?oldid=57263"
Community content is available under CC-BY-SA unless otherwise noted.